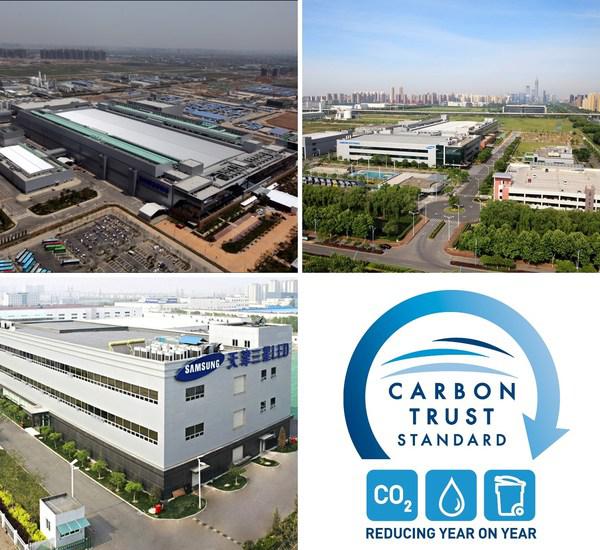 Samsung Semiconductor has 3 business locations in Xi’an, Suzhou, and Tianjin, 5 in South Korea (Kixing, Hwaseong, Pyeongtaek, Onyang, Cheonan), and 1 in Austin, Texas, USA. There are 9 in total. Obtained the "Carbon/Water/Waste Reduction" certification and obtained the "Triple Standard" label.

The "Triple Standard" requires companies to meet three years to reduce carbon emissions at business sites by 3.7%, water consumption by 2.2%, and waste emissions by 2.1%. At the same time, they must also meet the comprehensive evaluation standards of various business systems. Can only be granted.

Due to the characteristics of the semiconductor industry, the higher the level of integration, the increase in water consumption and carbon/waste emissions. Therefore, the "triple standard" that satisfies these three conditions at the same time is a certification that is difficult for the semiconductor business to obtain.

In 2019, Samsung Semiconductor’s China business site purchased the Renewable Energy Certificate (REC) [2] and converted it into renewable energy using electricity. Since then, Samsung Semiconductor has continued to promote the reduction of carbon emissions through activities such as reducing the use of greenhouse gases in the semiconductor manufacturing process and developing catalysts used in equipment to reduce greenhouse gases. Through such efforts, the average carbon emissions in 2020 will be reduced by approximately 1.3 million tons from 2018 to 2019.

Through the introduction of membrane [3] technology, the water efficiency of the process is improved to reduce water consumption

Samsung Semiconductor reuses the waste water generated during the ultrapure water manufacturing process in roof wet cleaning devices, cooling towers, etc., and improves the reuse of water resources by purifying waste water using membrane technology. In addition, a part of the reclaimed water system has been integrated to improve the operating efficiency of the facility. Through the above methods, a total of 10.25 million tons of water has been saved. In 2020, the reuse of water resources at all business locations of Samsung Semiconductor is approximately 70 million tons, an increase of approximately 12% from 2018 to 2019.

Reduce waste water and sludge by replacing materials and change the recycling, separation and discharge system

By using alternative materials, Samsung Semiconductor has greatly reduced wastewater sludge. Wastewater sludge is the sediment produced in the semiconductor wastewater treatment process, which accounts for almost 60% of the total waste generated by the semiconductor business site. Through the conversion of materials used in the process and the reduction of the amount of materials supplied to specific equipment, wastewater sludge is reduced to a certain extent. In addition, through the provisions of the packaging material standards for the products used on the production line, the use of cardboard, the number of plastic packaging, and the number of rope ties have been reduced. At the same time, the discharge of disposable packaging materials has also been reduced. Through the above efforts, Samsung has reduced a total of 35,752 tons of waste.

In particular, the classification and discharge system for recyclable products in the office has also been changed. The original 3 types of separate collection boxes have been replaced with 6 more subdivided types. In order to build a correct classification and emission culture, Samsung and its employees have carried out an activity of "empty, flush, separate, and not mix", and work together to reduce waste.

In addition, since 2009, Samsung Electronics has obtained environmental certifications such as carbon footprint and water footprint for a total of 41 semiconductor products in compliance with different certification agencies at home and abroad.

In the future, Samsung Electronics plans to implement more effective environmental protection practices throughout the entire process from semiconductor production to supply.

[1] Carbon Trust: Since 2001, as part of the plan to address climate change and reduce carbon emissions, it is an environmental certification body established by the British government.

[3] Membrane: A membrane that can selectively deliver specific components to separate mixtures.