首页 > 行业资讯 > Intel will be Qualcomm foundry chips: plans to catch up with TSMC and Samsung in 2025.

Intel will be Qualcomm foundry chips: plans to catch up with TSMC and Samsung in 2025.

According to reports, Intel announced on July 26 that the company's factory will start producing Qualcomm chips, and announced plans to expand its foundry business by 2025 to catch up with competitors such as TSMC and Samsung. Intel said that Amazon will become another new customer for its chip foundry business. For decades, Intel has been leading the way in producing the smallest and fastest computing chips.

But the company's leading advantage has been taken away by TSMC and Samsung, the latter's foundry services have helped Intel's competitors AMD and Nvidia produce chips with better performance. AMD and Nvidia will design their own chips and hand them over to chip foundry companies for production.

Intel said on Monday that the company will regain its lead by 2025 and elaborated on the five-set chip manufacturing technology it will launch in the next four years.

The most advanced of them will use Intel’s first transistor design in decades, this kind of micro switch can translate various signals into 1 and 0. As early as 2025, the company will also use a new generation of extreme ultraviolet lithography equipment from ASML in the Netherlands. This technology will project chip designs onto silicon wafers, a bit like printing old-fashioned photographs.

"We explained many details to Wall Street to enhance our sense of responsibility." Intel CEO Pat Gelsinger (Pat Gelsinger) said.

Intel also said that the company will change the naming mechanism of chip technology, using names similar to "Intel 7" to match similar technologies from TSMC and Samsung.

In the "smaller the better" chip industry, Intel's previous name was an allusion to the size of the function in the unit of "nano". But Dan Hutcheson, CEO of independent semiconductor forecasting company VLSIresearch, said that over time, the names used by chip manufacturers have become arbitrary marks. 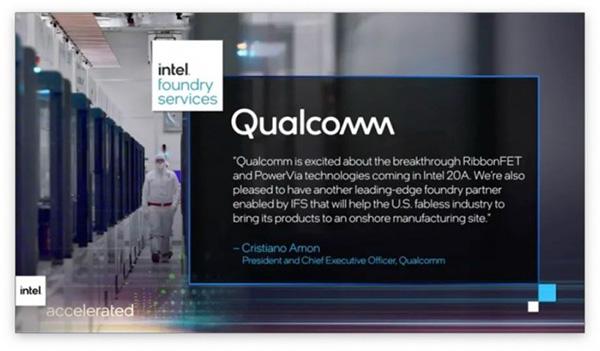 In recent years, Amazon is stepping up efforts to produce its own data center chips for its AWS cloud computing service. The company has not yet used Intel’s chip manufacturing technology, but will use Intel’s packaging technology, which is the process of assembling chips. Stacked in a so-called 3D mode. Analysts said that Intel has performed well in packaging technology.

Kilsinger said: "We have had many hours of in-depth technical exchanges with these two major customers and other customers."

Intel did not disclose the revenue or output obtained through these customers, but Kilsinger said at a press conference that Qualcomm's transaction involves an "important mobile platform" and will develop in-depth strategic cooperation with it. Qualcomm has always used multiple foundry partners to produce chips for it, and sometimes even uses this model on the same chip.

The biggest question Intel faces is whether the company can realize its various technological promises after years of delay under the leadership of former CEO Brian Krzanich. Intel announced in recent weeks that it has postponed the release of its new data center chip Sapphire Rapids.

But Real World Technologies analyst David Kanter said Intel is more cautious than before. Part of the reason why new product releases have been postponed before is part of the reason for Intel’s “arrogant” mentality of trying to solve multiple problems in a generation of technology.

This time, Intel plans to introduce 5th generation technology within 4 years to gradually solve a series of smaller problems. They also said that if they are not fully prepared, they may not introduce new extreme ultraviolet lithography technology in the upcoming "Intel 18A" process.

"In the next few years, when competing with TSMC, Intel will definitely catch up and lead in some areas." Kanter said, "Intel has plenty of talents, and they will spend time studying how to use new materials and new technologies to improve product performance."