首页 > 行业资讯 > IC insights: The world's top 15 semiconductors in the first quarter are released, Intel, Samsung, TSMC and HiSilicon fall out of the top 15

IC insights: The world's top 15 semiconductors in the first quarter are released, Intel, Samsung, TSMC and HiSilicon fall out of the top 15

The latest report of IC Insights shows that the semiconductor revenue of the world's TOP15 semiconductor factories in the first quarter of this year totaled 101.863 billion U.S. dollars, an increase of 21% year-on-year.

According to the report, the world's top 15 semiconductor (IC and OSD optoelectronics, sensors and discrete devices) manufacturers achieved 21% year-on-year revenue growth in the first quarter. If divided by region, the United States is still the strongest in the world, with eight local-based manufacturers making the list. In addition, South Korea, Taiwan and Europe each have two entries. Intel, Samsung, TSMC, SK and Micron ranked in the top five. 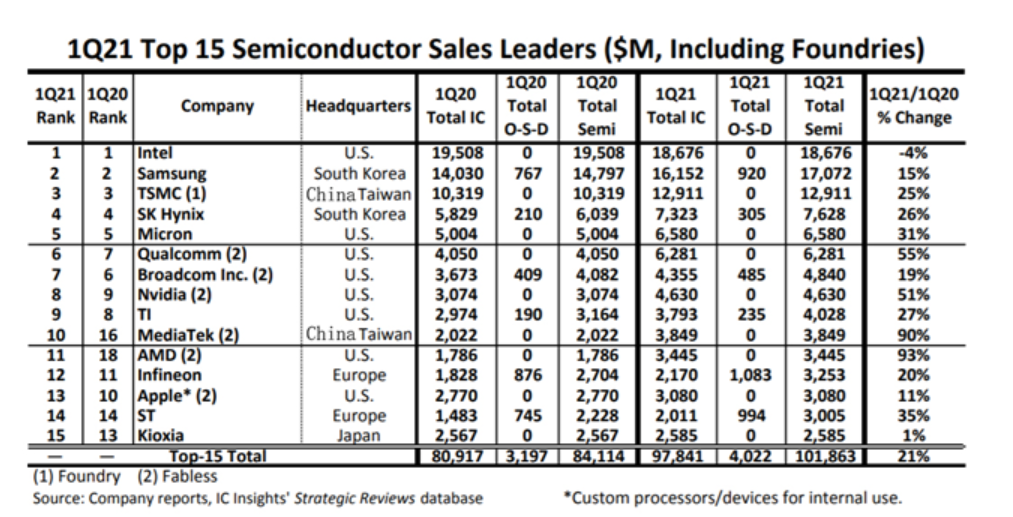 According to the statistics of manufacturers, according to the ICinsights report, among the top fifteen manufacturers, there are six fabless fabs: Qualcomm, Broadcom, Nvidia, MediaTek, AMD and Apple. The pure wafer foundry is TSMC. Except for these vendors, all other vendors are IDM. The report further emphasizes that if the pure fab TSMC is excluded, NXP, headquartered in the Netherlands, will be included in this list. According to the report, in Q1 of 2021, NXP's revenue was US$2.503 billion.

It is worth mentioning that in the 2021 Q1 list, only Intel, which ranks first, has a year-on-year decline in revenue. In addition, Huawei HiSilicon, which ranked tenth in the same period last year, fell out of this list due to four rounds of sanctions imposed by the United States.

According to ICinsights' statistical report, in the 2018 semiconductor TOP15 list, the above-mentioned European, American, Japanese, Korean, and Taiwanese manufacturers are still entering the game. But in Q1 of 2019, Huawei HiSilicon from mainland China jumped to the top 15 global semiconductors for the first time. According to the ICinsgihts report, Huawei HiSilicon’s Q1 revenue in 2019 increased from US$1.25 billion in the same period in 2018 to US$1.755 billion, a year-on-year increase of 41%. The company's global semiconductor ranking also jumped to 11th from 25th in the same period in 2018.

The huge increase in HiSilicon’s turnover was related to Huawei’s increased adoption of self-developed chips in the company’s products at that time. Because of well-known reasons, Huawei has begun to rely on itself. In May 2019, the United States included Huawei on the "Entity List", which further increased Huawei's adoption of self-developed products, which also helped Huawei HiSilicon to further enhance the company's position in the global semiconductor industry.

IC isights also predicted in its report that the time to enter the top ten may be short. Because after the US launched the second round of sanctions, semiconductor suppliers are prohibited from using US-made equipment to produce chips for Huawei/HiSilicon. The chip foundry manufacturer (TSMC) can only accept orders from Huawei until May 15. The production will also end on September 15. Yu Chengdong, president of Huawei's consumer department, also said last year that Kirin 9000 may be the last generation of Huawei's high-end Kirin chips, because no manufacturer can produce high-end chips for Huawei anymore.

In the follow-up development, we have also seen that Huawei HiSilicon dropped out of this list after briefly ranking tenth in the world. There is also a shortage of HiSilicon monitoring and TV chips in the market, which is confirmed by the plummet of Huawei's smartphone business.